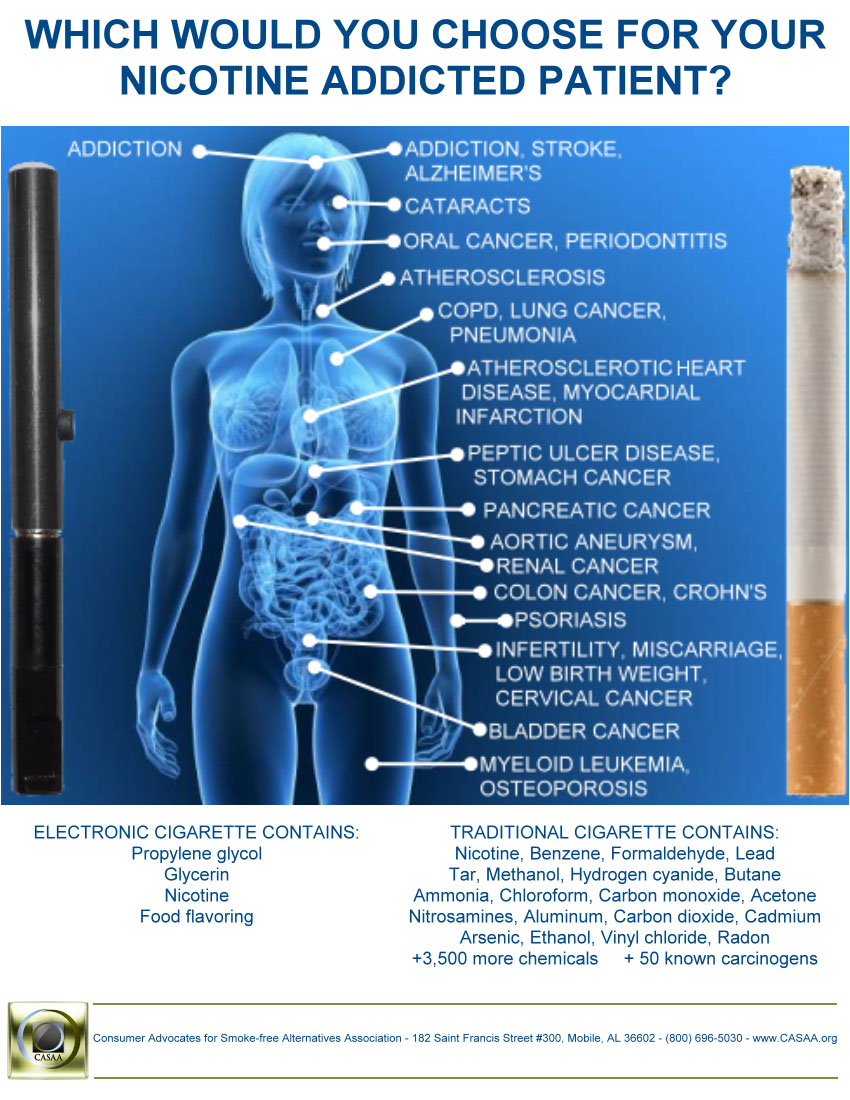 
What is in the liquid?
Most contain propylene glycol (a non-toxic, liquid base), nicotine, glycerin and food flavoring.


Is it safe?
While nothing is 100% safe and further testing needs to be done regarding long-term use, based on the fact that they contain only
ingredients already shown to be safe for human consumption and research studies show that they do not contain most of the
toxins or levels of carcinogens that are found in tobacco cigarettes, we are reasonably certain they are considerably safer than
tobacco cigarette smoking.


The American Association of Public Health Physicians (AAPHP) supports the use of electronic cigarettes as a reduced harm
tobacco product. The AAPHP released a statement that electronic cigarettes "could save the lives of 4 million of the 8 million
current adult American smokers who will otherwise die of a tobacco-related illness over the next 20 years."

Doesn't nicotine cause cancer?
Nicotine is an addictive stimulant, similar to caffeine and is not shown to cause cancer. Although nicotine use carries other
possible health risks, without the tobacco smoke, it is relatively low risk.


Didn't the FDA say electronic cigarettes are dangerous and banned them?
The FDA tested 18 samples and found that a few had trace amounts of possible cancer-causing nitrosamines, which were found
only at parts-per-billion. The FDA allows certain levels of nitrosamines in products. Independent testing showed that the levels of
nitrosamines were nearly identical to those found in FDA-approved nicotine patches. They also found that one cartridge was
contaminated with "about 1% diethylene glycol," however subsequent tests have found no other contaminated cartridges to date.


Because consumers have reported that switching to e-cigarettes have allowed them to refrain from smoking, the FDA asserts that
electronic cigarettes are a nicotine cessation treatment and therefore drugs. While the FDA has been confiscating e-cigarette
shipments, they have not been legally banned. A federal judge recently ruled that the FDA is overstepping its authority and agreed
with the AAPHP that they are a reduced-harm tobacco product. The D.C. Federal Appeals Court subsequently upheld that ruling.
The AAPHP has also petitioned the FDA to retract their misleading statements about electronic cigarettes and allow them to be
marketed as reduced harm tobacco products.


Find out more at www.CASAA.org


CASAA is a non-profit organization of concerned volunteers. Our mission is to ensure the availability of effective, affordable and reduced harm alternatives to
smoking by increasing public awareness and education; to encourage the testing and development of products to achieve acceptable safety standards and
reasonable regulation; and to promote the benefits of reduced harm alternatives.